The ideal place to work: a seafarer’s story

"Thenamaris is the ideal company for someone who wants to learn through experience," says Giorgos Tsolakis. "I first came to work at Thenamaris as a cadet in 1997. I was on a placement during my time at the Merchant Marine Academy, and as a cadet my role was to assist the Chief Officer with his everyday duties."

“From the beginning, it was a very positive environment,” Giorgos continues. “I was particularly lucky to be working for Captain Mathios Poulis. He helped build my ambition to do well in the ship management sector.”

However, it wasn’t just Captain Poulis who helped Giorgos. “A vessel is a society in miniature,” he says. “The captain influences the working climate, but your life on board depends on every single person you work with. The whole crew was involved in helping cadets to learn the ropes, including the Chief Officers and the Chief Engineers.”

A great place to learn

He adds: “Everyone was so helpful that when the time came for me to go back to the Academy, I didn’t want to leave! Sadly, though, I had to go back and took a flight from Trinidad, where the vessel was trading at the time.”

Giorgos returned to the Merchant Marine Academy to complete his studies.

In 1999, Giorgos graduated from the Academy and evaluated his options. He wanted to work in the tanker segment, as this was an exciting sector that he wanted to gain experience in. He decided to apply to Thenamaris, as he had enjoyed his time there as a cadet so much. 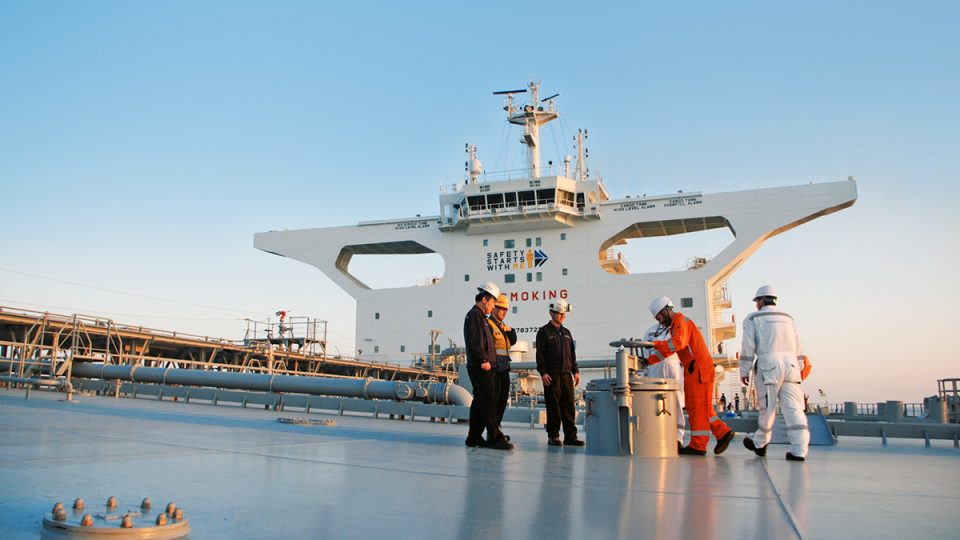 Giorgos was successful in his interviews, and Thenamaris took him on initially as Second Officer, before promoting him to Chief Officer in 2007 and finally to Master in 2014.

“There are certain things which impressed me at the start about Thenamaris, and which I still appreciate,” says Giorgos. “There’s great collaboration between officers on board and shore personnel. The company is very fair in the way it treats its people, recognizes ambition and rewards hard work.”

The fact that Thenamaris has a large managed fleet with a high rate of vessel renewal is another of the company’s strengths. According to Giorgos: “Newer vessels require less maintenance, and have more up-to-date technology and better accommodation. These are all important factors for seafarers as they add up to a great work environment.”

Giorgos appreciates the people that Thenamaris employs and the way it nurtures and develops them. “Thenamaris people are eager to do their best, but they also take things in their stride and deal with problems calmly. I think this is down to good recruitment and the company’s commitment to ongoing training and development.”

Not always easy sailing: dealing with a Force 11 gale

In any job there are hurdles to overcome, but the life of a seafarer can present particularly difficult challenges.

“When you’re on board you can face a diverse range of problems, from engine failure to typhoons and illness,” says Giorgos. “And when you do, it’s as though the vessel is a small village in the middle of nowhere, surrounded by numerous dangers and risks.”

“But the most serious problems can occur when you encounter severe weather conditions. Once I was on a vessel passing by Cape Town, en route from the Gulf to the US. A violent storm started and we were dealing with Force 11 winds and exceptionally high waves. The alarm went on, indicating that there was damage at the fore of the vessel and that water was entering the forecastle. The master turned the vessel around so it was facing into the wind. Then it was my job to walk to the fore and check what the problem was.”

“At that moment I felt immense responsibility for the lives of my fellow crew, as well as for the cargo, the vessel and the environment. I fixed the problem, but it reminded me that we should never underestimate the power of the elements.”

World class support during a career at sea

Serving as Second Officer, Chief Officer and Master on board Thenamaris vessels, Giorgos remains both influenced and impressed by the Port Captains and Superintendent Engineers from Thenamaris’ head office who pay regular visits to the vessels, as well as by external auditors. “These individuals help draw my attention to areas I need to focus on, such as new safety regulations,” he says. “In particular, I feel able to share my concerns with the office representatives, as they always make an effort to provide the crew guidance and support. They’re almost like family to me.”

Giorgos believes that he has benefited greatly from training during his time at Thenamaris. “So far, I’ve attended various forums, seminars and trainings in Athens which have enabled me to stay up to date with changes. Thenamaris sets a very high standard for this type of activity in the Greek market,” he comments.

“I’ve also developed my skills and knowledge through being exposed to a wide range of different countries and cultures during my many years of travelling. This has helped me develop very good cross-cultural interpersonal skills, which are essential for managing an onboard team effectively.”

And what advice would Giorgos give to a young person who’d like to pursue a career in ship management today? “To work as a seafarer, you need to have a real passion for life at sea,” he says. “You need to make a conscious decision to work in a job where you’re likely to spend eight to ten months on a vessel, and then just four months ashore. If you don’t embrace this lifestyle, then you will never enjoy your time on board.”

“If the life of a seafarer appeals to you, I’d strongly recommend Thenamaris as a top employer,” he adds. “The company is built on strong foundations. It has been successful in the market for many decades, and I believe that it will continue to be for many more to come.”

Marine Personnel
More than 2,900 seafarers are employed on the vessels managed by Thenamaris
On Board Careers
Attracting and retaining highly-skilled seafarers
Business Relationships
A global network of outstanding business partners
Health & Safety
Integral to our mission
Safety & Quality
Safety and quality are at the forefront of everything we do.